Some people can hop on a plane at a moments notice, not me. I wouldn’t want to miss out on the joy of planning a trip and the anticipation that builds up. Admittedly, I used to over do it. Since I wanted to explore, and not just sit at a spa, I’d try and squeeze as many places and activities into one trip as possible. Then I realized that in my attempt to experience everything, I wasn’t fully experiencing anything. It was time to relax, and maybe even schedule some spa time.

Once I stopped treating each vacation as a checklist, I started to get comfortable with leaving attractions for next time. Sometimes I’d even go back to the same spot more than once. Although there are so many new places to see in Japan, when one brings you as much joy as Byodo-in Omotesando Road you can’t wait to return. 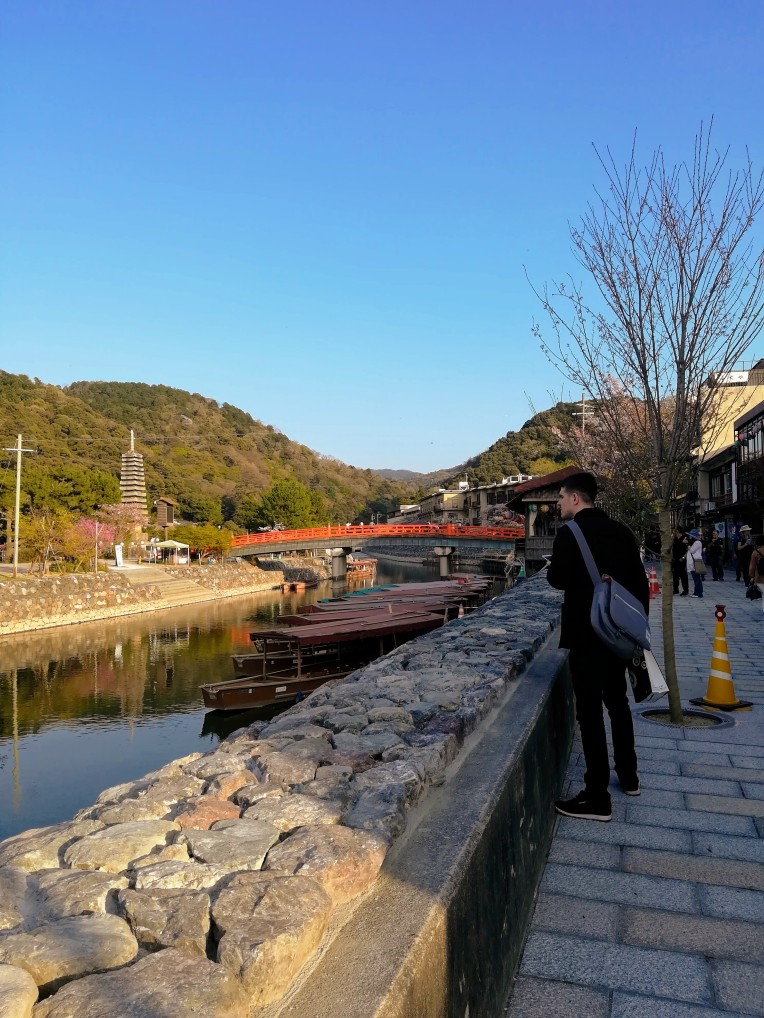 After visiting most of the tea shops on the main road, I wanted to go back and spend more time by the river. While walking along the trail, I spotted Fukujuen Café Uji. I hoped that the high price of their ceremonial matcha was an indication of its quality. They invited me to find a seat at the second floor, and I was happy to find a table overlooking the river.

While waiting for my order, I looked around only to discover an entire tea-making machine exhibition. It was interesting to see the machines up close, especially after the tour of Marukyu-Koyamaen. Once I was served, I was pleasantly surprised to learn the matcha I ordered wasn’t already prepared. Luckily I also learned how to properly whisk matcha on the tour, and was excited to put my newly acquired skills into practice. 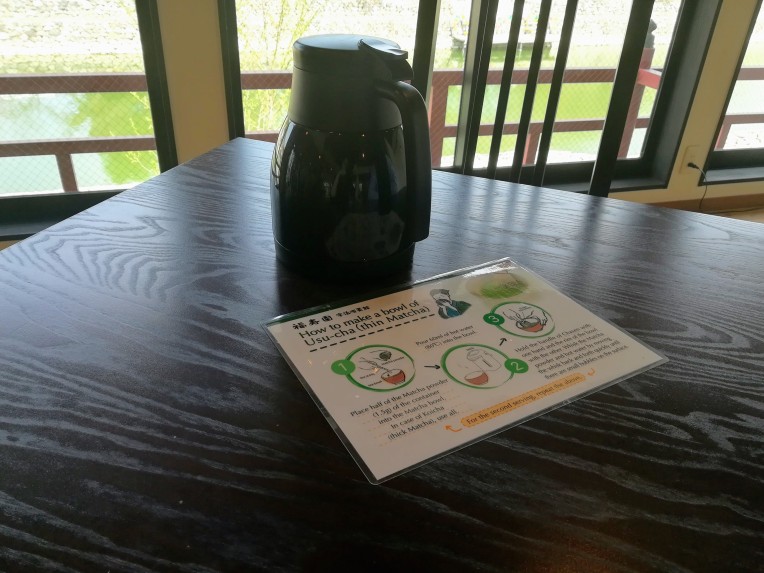 The matcha set was served with instructions on how to prepare both usucha and koicha, a kettle, and a tray. On the tray there was an empty bowl of matcha, bamboo whisk, chashaku scoop, chaki container, and wagashi. As I vigorously whisked the matcha powder, it quickly dissolved and a thick foam began to appear. The matcha had a vibrant green colour and inviting fresh scent. As is tradition, I enjoyed the wagashi first and then slowly sipped every last drop of matcha.

Instead of taking the subway from Umeda Sky Building, I decided to walk back to the hotel. This way I could explore different neighbourhoods in Osaka, and make it to my room before dark. The walk would take about 40 minutes, and I wondered if that was too long of a wait for dinner. Exploring would be more enjoyable if I wasn’t worried about getting hungry and then having to find food without wifi. 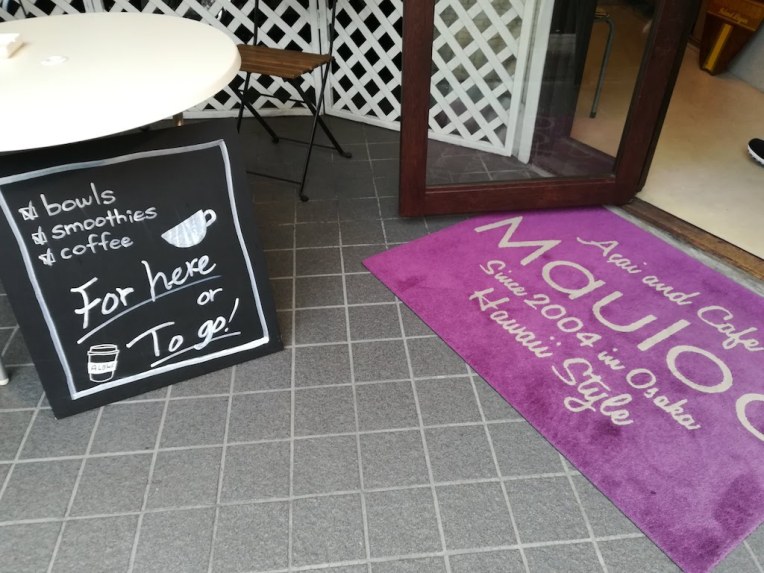 The nearest place with vegan options was Mauloa Acai and Cafe. The cafe has great reviews, and it helps that I already love acai bowls. As I walked in, the beautifully decorated cafe transported me to Hawaii. Or at least how I pictured Hawaii looks and feels. The greeting was also as warm as I would imagine. There was so much to see, and take pictures of, that I almost forgot about ordering.

After a quick look at the menu, I noticed a sign for their newest acai bowl called PB energy. It sounded great, and tasted even better. The cute mug shaped bowl was bigger than expected, and it kept me full with the addition of peanut butter. I also ordered a few extras to be sprinkled on top even though it already included granola, banana, blueberries, honey, cacao nibs, hemp seeds, and almonds.

Acai bowls seem to look and taste better when made at a restaurant, but I can’t wait to buy some acai and add it to a smoothie at home.

After having Kitsune Udon at Umeda Station, I walked over to Umeda Sky Building. Instead of heading directly to the top of the building, I first tried to find a Doutor. The cafe advertised their sakura flavoured desserts in celebration of the cherry blossom season, and I wanted to taste the Sakura Mille Crepe Cake. At the time, I was still making exceptions for desserts that weren’t plant-based.

I had looked up the directions for Doutor back at the hotel, and was convinced I knew the exact building and level. Then when I didn’t spot the cafe, I started to panic. I had found myself in an underground market with no Doutor in sight. Although it was a wonderful recreation of an old Osaka street from the early 20th century, I couldn’t focus on exploring it. I darted from one area to another, desperate to stick to my schedule. I felt lost without any internet, and once again forgot to keep an open mind while travelling. I reminded myself that I wasn’t actually lost or even alone, and that it wasn’t the end of the world if things didn’t go according to plan. Maybe I’d even find a better sakura dessert later on.

Just as I had thought of skipping dessert and heading to the rooftop, Francois had found the cafe. I finally ordered the Sakura Mille Crepe Cake, and noticed that the dessert set came with coffee at a discounted price. I tried to order a decaf soy latte, but it wasn’t going well. The soy latte part was understood, but not the decaf part. When I tried to paraphrase, the barista tried to suggest hot chocolate. This seemed like a weird suggestion at first, but then I realized that technically it was a warm drink without any caffeine. It seems that the barista did understand me after all, but was trying to be polite.

After reading between the lines that decaf coffee wasn’t available at that location, I ordered the soy latte and figured that at least it was discounted. Then the total price was different from the discounted set price. There was no one in line behind me, so I casually asked about it. The server kindly explained that since soy milk was extra, the set was only available with a dairy milk latte. Even though this all happened much quicker than it sounds, I still felt bad about bothering him with my complicated order. I reassured him it wasn’t a problem, thanked him for all of his help, and quickly paid.

The Sakura Mille Crepe Cake was adorable and tasted like strawberry jam. I was mostly just happy to finally relax and enjoy my dessert. When I was done, I calmly made my way to the entrance of the Umeda Sky Building. First, I walked around the indoor observatory taking in the beautiful views of Osaka. Then I went to the rooftop to experience the Floating Garden Observatory. The open air observatory was absolutely terrifying. There was no glass hiding the city views, which makes it ideal for taking good pictures but terrible for someone with a fear of heights. It was so windy, I was convinced I would fly right off the building. 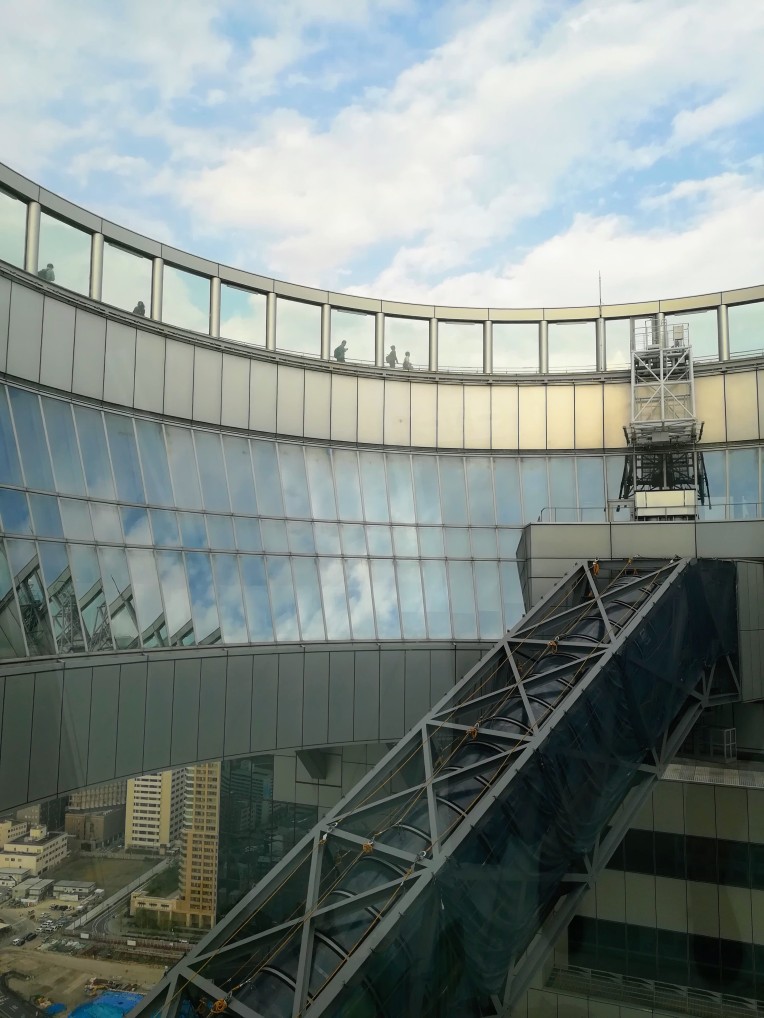 As I clutched my bag, I began to panic for the second time that day. While changing course had caused me stressed earlier, this time it brought me comfort to know that I could simply go back down. I knew my fear was irrational since other people were walking around happily. Not to mention that the rooftop wouldn’t be open if it was dangerous. However, I decided that I shouldn’t feel pressured to walk around if I wouldn’t enjoy it. I was brave enough to check out the top level, and didn’t need a picture to prove it. Besides, Francois would fill me in and show me his photos. I went back down to the enclosed observatory area, where I could enjoy the view more peacefully.

After a busy afternoon tasting hojicha and matcha in Uji, I spent the following morning relaxing among the cherry blossoms at Osaka Castle Park. The area was beautiful with plenty to see. Last time I visited the park, I went straight to the castle. However, this time I wanted to explore the quieter spots by the river. 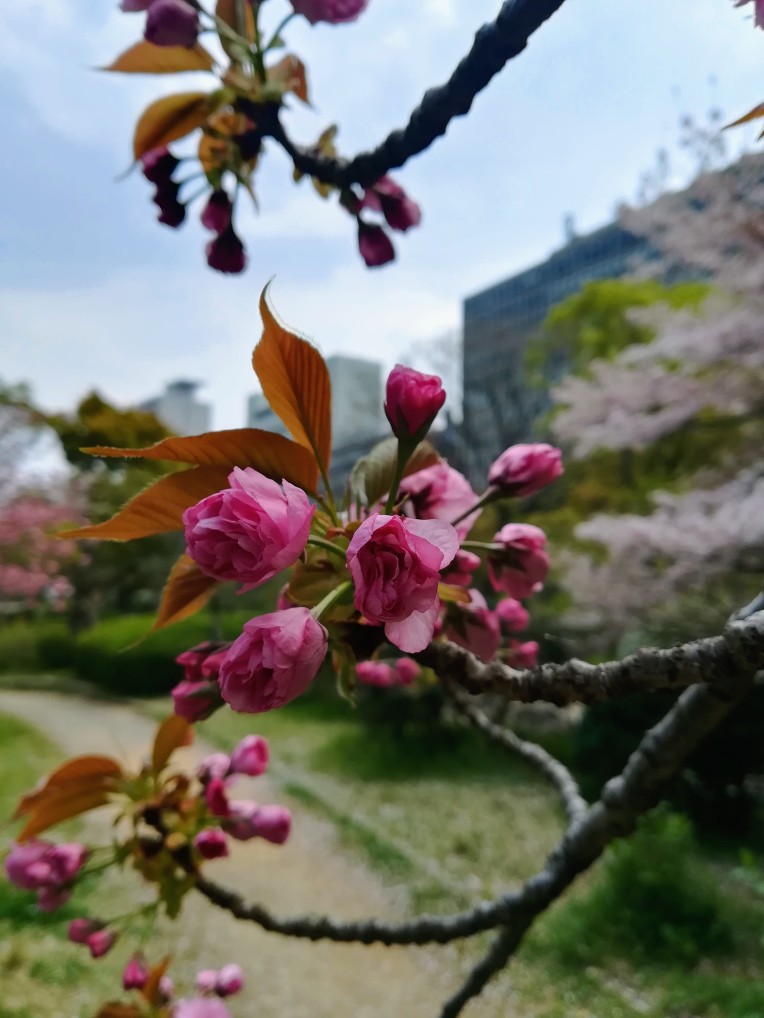 As part of the Japanese tradition of hanami, everyone was quietly adoring the blooms. Then as soon as it got windy, people rushed to capture the petals falling to the ground known as hanafubuki. 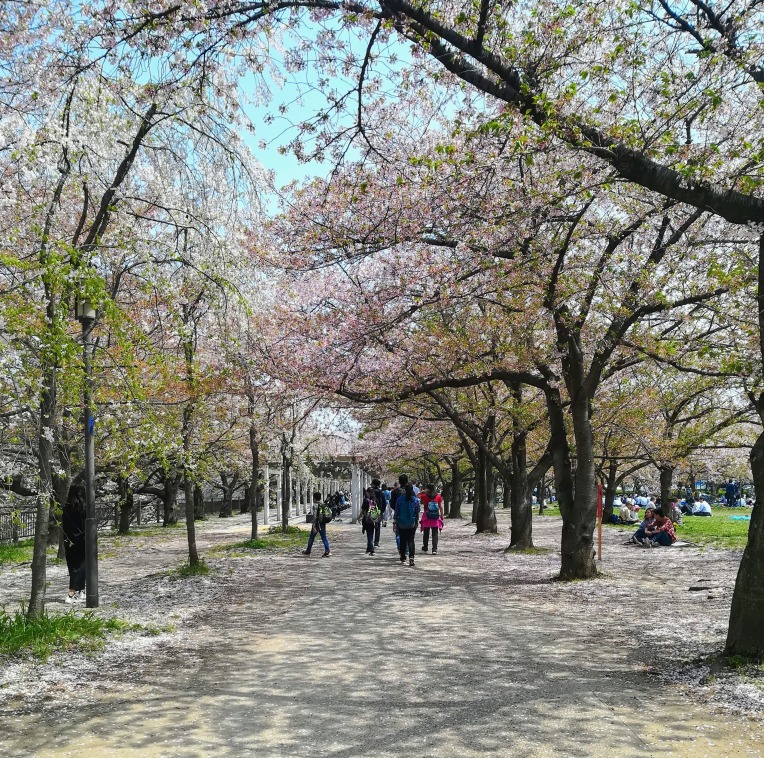 At lunch time I made my way to Umeda district. The giant station and surrounding malls offered a variety of food options. Even with the wide selection, it was tough to find something plant-based. Since I was craving noodles, I came up with the idea of ordering Kitsune Udon without the dashi broth. I explained the reason to ensure they wouldn’t worry about my enjoyment of the dish and they kindly accommodated me. The Kitsune Udon came with udon noodles topped with flavourful deep-fried tofu, a sprinkle of seaweed shreds, and sliced green onion. Even though I’m sure other people thought it was crazy to be eating noodles without the broth, the noodles tasted amazing with a drizzle of soy sauce.

Just to be sure I wouldn’t leave hungry, I also ordered the Inari sushi. This type of sushi is usually vegan by default as it is simply rice stuffed in the same deep-fried sushi pocket that comes with Kitsune Udon. After this filling and delicious lunch, I was ready to go looking for dessert.

If you’re interested in tasting my favourite hojicha from Japan, join the Hōjicha Co. newsletter to receive a subscriber exclusive discount this Friday! 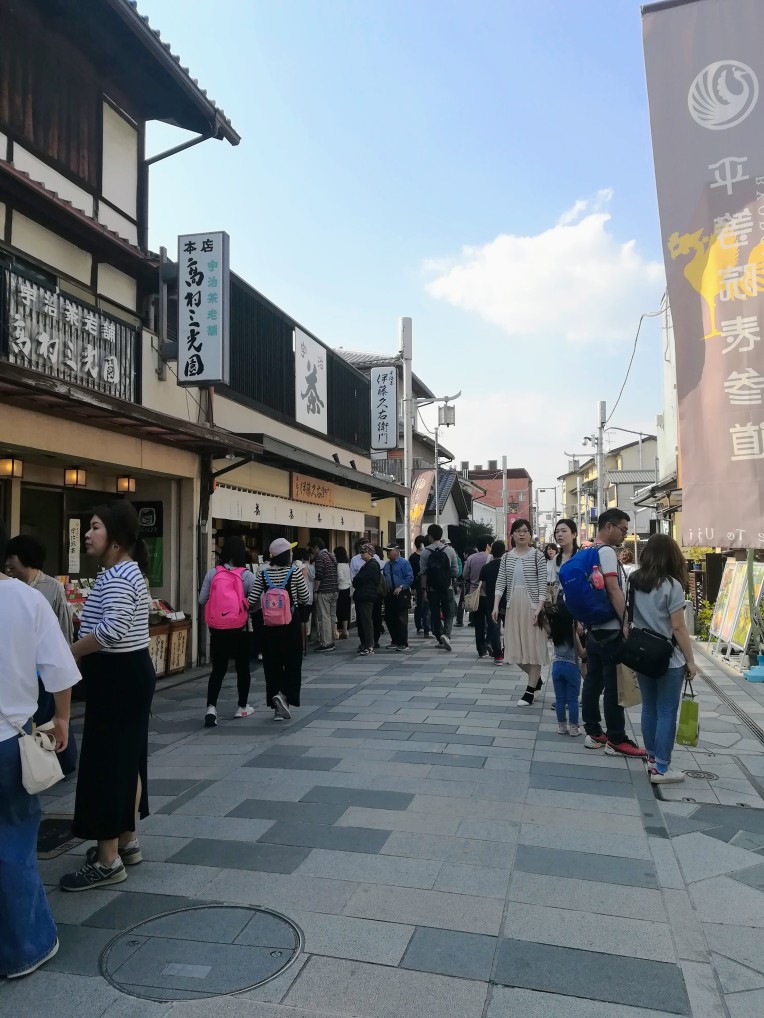 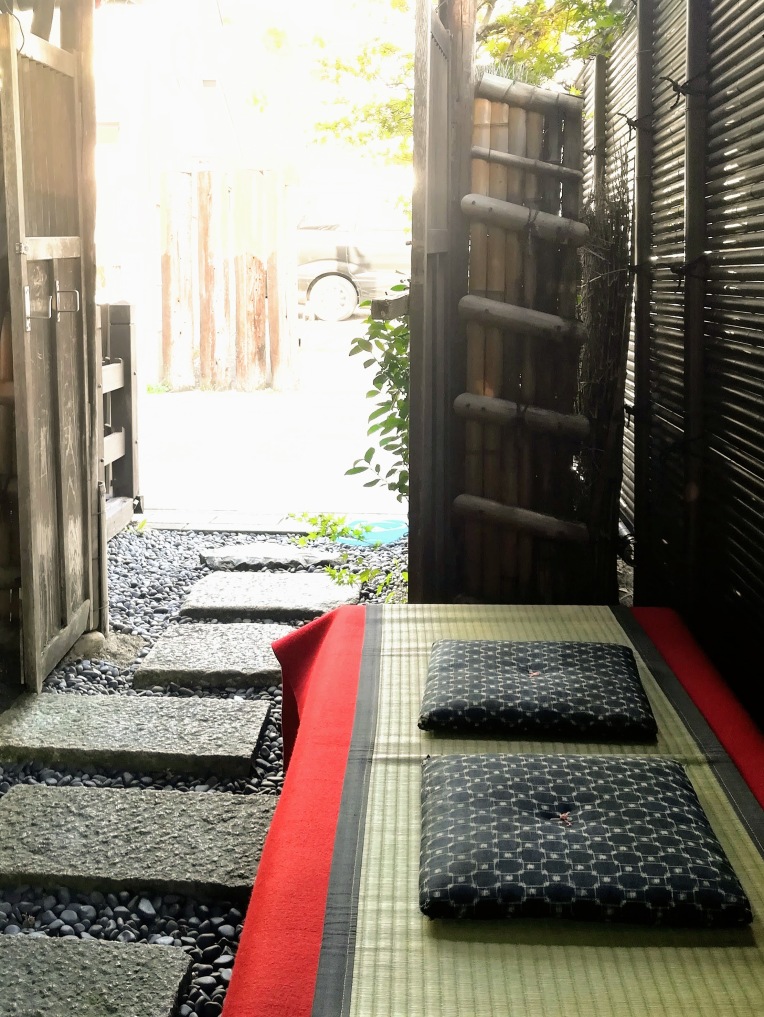